I was up at the barn project again this weekend, but things didn’t exactly go as planned.  I brought a bunch of seedlings up with me to get a hedge started along the property line, and I had thought that I might have help in planting them.  As it turned out it was just me again this weekend, so I planted them all myself.  I think that took 4 or 5 hours.  Planting them in the ground was one thing, and there were a couple of stones to dig out and then there was the watering. That all took perhaps two-and-a-half hours.   Then there was mulch, which was pretty quick to spread around.  What took me a surprising amount of time were the wire cages I put around each plant; you can see part of one in the image below.  I bent them myself from 36-inch rabbit fence that I got from the home center because that was cheaper than anything else.  Then I staked them down and put little flags on them to keep then from being accidentally trampled or perhaps driven over.  It took a while but hopefully it will all grow up into a nice little hedgerow.  I’ve got western redbud, desert olive, manzanita and coffeeberry.

I also finished framing the deck!  The beams were already up, but I installed the joists and the frame is ready to go.  I went shopping for redwood deck boards, but I was not as successful as I might have liked.  The lumber that Home Depot had was pretty badly split on the ends.  Hills Flat had better stock but it’s green, so I have to wait for it to dry out before I can back-stain the planks and then install them.  Depending on how long that takes I might just put some OSB on the deck and proceed with building the stairs and installing the 2nd floor door. 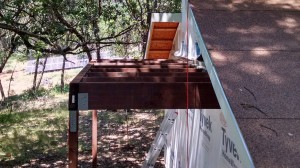 Having finished those tasks, I had about two hours left before I needed to be getting in the road.  Not enough time to start any big tasks, but I was able to cut and install the trim around the downstairs door.  I think it looks good! 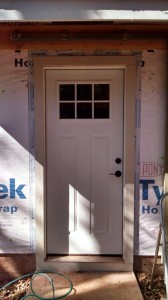