After living in my house for nearly a year, I finally got around to buying a stove! 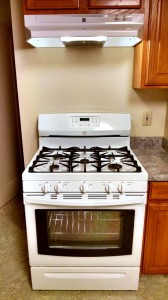 I chose a white one because I’m sort of converging on a white theme for this kitchen.  The fridge is white and I am going to put in a white enameled sink.  I’m going for an “Iowa Farmhouse” aesthetic, to complement the chickens in the back yard.  Also the price was very attractive and this model got an excellent rating from Consumer Reports.

I guess it’s properly called a range.  Why do they call it that?  If you have an appliance with only the burners then it’s called a cooktop, and if you have just an oven then they call it an oven.  So why does the marketing literature always call stoves ranges?  I guess range is probably technically correct.  A stove would be more like something that you burn wood in.  Who has ever heard of a wood burning range?

I also ordered a vent hood.  The delivery guys arrived on Wednesday afternoon and dropped everything off, but they didn’t do the installation.  They were supposed to hook up the stove, or perhaps the range, but the gas compression fitting was an incorrect size and the guy couldn’t get it unscrewed to install the proper one.  It looked like it had been sealed with some sort of cement instead of pipe tape or dope, and it was completely immobile.  Maybe whoever originally put it on thought that would be better than doing it the correct way?  I would up having to replace the whole shutoff valve, which I did myself later in the evening.  Home Depot is apparently so confident that all modern ranges use 5/8″ compression fittings that they sell a valve which has a non-replacable fitting of that size cast into the valve body on the outlet side. 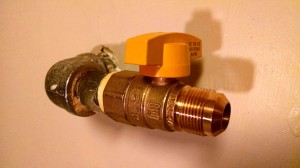 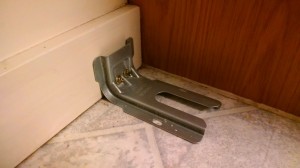 I also installed the child safety bracket for some reason.  I don’t have children, so it’s not like anyone is going to climb on the oven door and try to tip the appliance over.  But it came included for free so I figured I might as well use it.

Fun fact:  The hex head screws included with the anti-tip bracket are metric.  Thanks, Kenmore!

To be clear, I haven’t been eating at In-N-Out burger every day for a whole year or anything like that.  I have a nice induction hot plate which together with a pressure cooker can make all sorts of things.  As versatile as that setup was however, there was no way to properly bake or roast with it.  It will be nice having an oven again, I’ll have to make up a batch of ginger cookies this weekend to properly test it out!  🙂