I didn’t get a whole lot of barn work done today.  I spent several hours trying some various ideas for getting my new air compressor running on my 4kW generator, none of which actually worked. In the end I tried running just the motor with the compressor drive belt removed and I found out that the generator won’t even start the compressor motor with no load at all.  Here’s what I think is happening:  The motor starting winding draws a ton of amps when the motor first kicks on.  On utility power this isn’t a big deal, there’s a centrifugal switch which turns off the starting winding once the motor comes up to speed a second or two after being energized.  On my generator however, the start winding draws enough current that it causes the generator engine to slow down.  The reduced speed causes a corresponding reduction in the frequency of the power that the generator is putting out.  Because of the lower frequency the compressor motor never gets turning fast enough to disengage the start winding, so it’s sort of a Catch 22.  The generator can’t put out enough power to fully energize the start winding, and the start winding won’t disengage until it gets enough power to get the motor turning at full speed.

Clear as mud?  Never mind.  Anyway it didn’t work so I gave up and used a little compressor that I brought with me from the shop to use as a backup.  My big compressor isn’t going to work until I get utility power hooked up.

Once I got around to actually doing some work instead of just playing with the machinery I got some roof flashing installed along with the starter strips for most of the upper North roof and one strip of roll roofing.  Here it is: 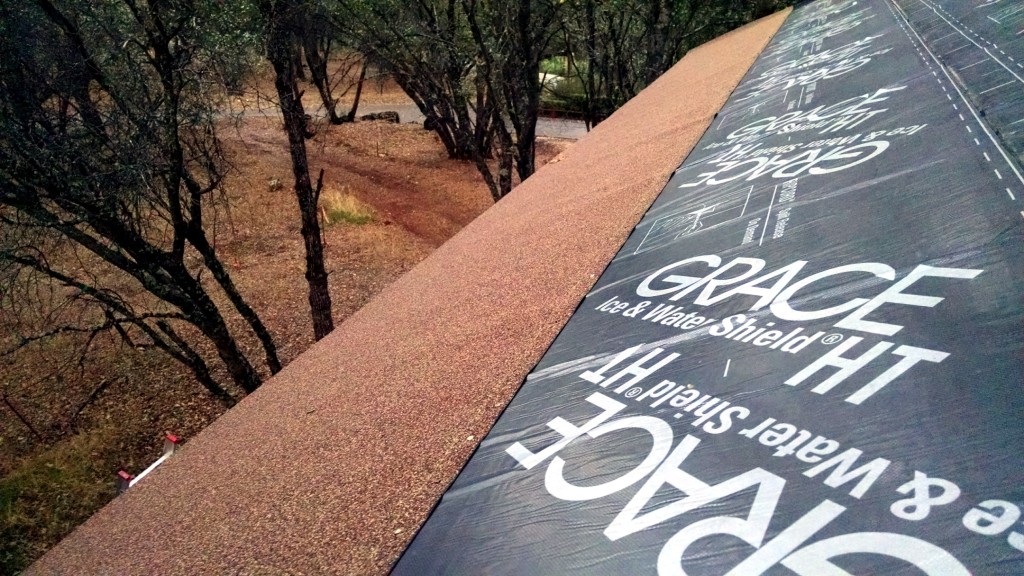 The wrinkles show through a little bit but I think it will be okay; you can’t see them at all from the ground.  This isn’t meant to be my permanent roof anyway, it’s just intended to last for a few years.  It’s pretty cheap as roofs go, the roll roofing only costs about $26 per 33 foot roll.  That’s under $400 for the entire roof.  By way of comparison my lowest quote for the vertical seam metal roofing which I want to install was about $4800.  The metal roof will outlast me, which is nice, but if I’m going to pinch pennies somewhere then the roof is the place to do it because it’s comparatively easy to re-roof the building later on.  The siding which I want to use is also a fairly expensive material and I’m never going to go back and re-side the barn so I need to buy that up front.

There were some more entertaining pictures yesterday from my buddy over at wanderingsofbaloo.org.  Who’s that crazy guy up on the ladder?  🙂

By the way, my old air compressor has turned out to be actually factually dead.  Not just mostly dead as made famous by the film The Princess Bride, but really truly completely dead.  It isn’t even trying to start any more.  I took it back to the bay area in case I get inspired to tinker around with it some, but I’m not sure it’s worth putting too much effort into a cheap Husky brand compressor which I bought back in 2003.  It has served me well and it may be time to put it out to pasture.  Maybe I’ll cut the old tank in half and make a super-strong charcoal grill, or a backyard planter or something.

Oh, one other interesting detail of note:  The neighbors are having a pretty sizable solar array installed.  At least they say it will be sizable, the crew hasn’t gotten started yet.  Today they were cutting down some trees to clear a nice sunny area for the panels which are to be ground mounted.  For the most part I couldn’t see where they were working but the sound of the chainsaws carried just fine.  I might be interested in “going solar” at some point, but I’m not going to use anywhere near enough power in the barn to make it worth the money right now.