I picked these up at Grainger yesterday.

The cheap connectors I got at the Depot have been leaking quite a bit.  They’re “universal”, which means that they don’t quite fit either of the common air connector styles properly.

I like the Dixon “automatic” connectors.  These particular ones allow you to mate them without pulling the collar back, which is convenient when your other hand is holding a nailer or a coil of air hose.

I tried Oetiker connectors in the shop, which have a really clever German-engineered disconnect and venting mechanism.  They are probably too complicated to work well after having been dragged around the dirt on the job site all day, and the mechanism gets difficult to operate after a while.  Plus they are like twenty-five dollars each.  Yikes! 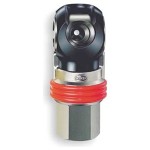 The only drawback to the Dixon connectors shown here is that the mating barrel is exposed at the end.  If you drop them onto a hard surface at just the right angle it can bend the barrel, which pretty much wrecks the connector.  In the more common mating mechanism that most cheap connectors use the collar affords a bit of extra protection.