My friend Brendan came out to the site for a 4-day weekend and helped me finish up all the wall framing and sheathing.  The project is coming along really well, it’s starting to look more and more like a building and not just a pile of lumber.  🙂 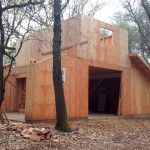 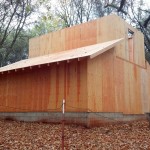 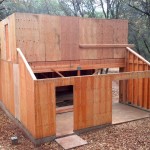 The leaves are coming down in earnest now.  There was some decent wind over the weekend which help to clean out the trees and everything is looking very much like fall.  The low angle sun also helps to belie the season.

I only got half of the south roof ledger installed.  That particular piece of lumber has been waiting to be used since the project began, and by now it’s quite well seasoned.  Driving nails into it was nearly impossible, I wound up standing on top of my A-frame ladder and smacking them with a 5 pound drilling hammer.  That was really a chore. 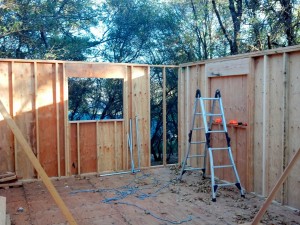 I’m optimistic that I can get the south shed roof framed this coming weekend, I think it should go reasonably quickly if I don’t run into any stumbling blocks.

Being more of a morning person than I am, Brendan helped kick my ass out of bed every day he was here so that we could get an early start.  Here he is slacking off on the job.  🙂 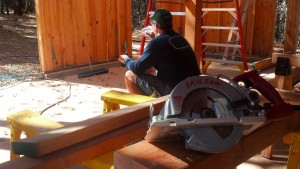 Get back to work you lazy bum!

The careful planning observer might look at the project progress since May and conclude that it’s unlikely I will be finished before it starts to be the wet and soggy season in the California gold country.  Obviously I would prefer otherwise, but I’m not terribly worried about the building.  The 2nd floor might squeak if it gets a lot of rain, but so long as things have a chance to dry out it will be okay.