I nearly finished the lower North roof on the barn this weekend.  I probably would have completed it but I ran out of 15/32 plywood and there wasn’t enough time to go get more of it. 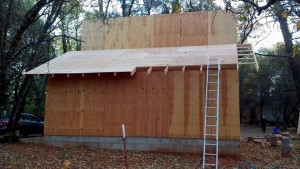 As I was cleaning up, I found what I think is a Western Conifer Seed Bug on the shed.  It’s not a significant pest, it’s just kind of interesting. 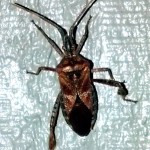 I wouldn’t have any idea what it was were it not for the preeminent entomological resource of our time: Facebook.  Seriously, whenever I find an interesting bug and post a picture of it to Facebook, someone is usually able to identify it or to at least come pretty close.  In this case the popular opinion was Box Elder Beetle.  They are very close, but I think this one has a thinner head and thicker legs.  I wouldn’t have found a page describing the Conifer Seed Bug without the initial lead, so I’ll chalk it up as another win for Facebook.