Sort of.  I hesitate to say “finished” because there are still a lot of details left.  I did however get all of the roll roofing nailed on this weekend. 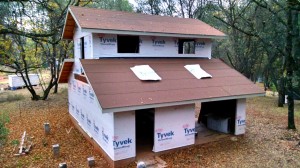 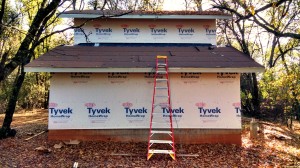 I also purchased and assembled a garden cart to help in toting tools around the property.  More on that adventure later.

The roll roofing still needs to have the edges tarred so that they stay stuck down when the storm blows, and there are some fiddly bits of flashing to work on around the skylight openings and the roof edges of the lower sections.  Despite those tasks being unfinished however it should shed water just great.  The underlayment already shed water great all by itself, so together with some actual roofing this should make for a pretty good roof.  🙂 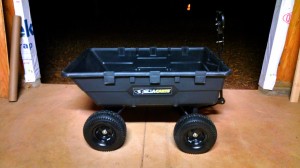 About that cart.  There’s a traditional American rite of passage which involves assembling your child’s first bicycle either on Christmas Eve or perhaps on the night before his or her birthday. It is supposed to involve unclear directions, defective components and missing parts.

I don’t have any children, but I swear that assembling this infernal garden cart was every bit as frustrating as the fabled bicycle. It even came with incorrect instructions!  They went out of their way to instruct you to assemble part of the frame with the holes facing in a particular direction.  The instructions even had you double check the orientation.  I should have known that something was wrong when the back of the frame, which even had the words FRONT and BACK stamped into the steel, was facing the wrong way round when assembled as the manual had it depicted.  The two halves of the frame were about eight inches too far apart to bolt together.  After taking it apart and reassembling everything according to orientation marks on the parts instead of according to the drawings then it all fit together just fine.

Anyway now I have a garden cart to help tote tools and things around the site.  It even holds my twelve foot fiberglass A-frame ladder if I balance it in the center.  That’s nice because the ladder is pretty heavy.  Even heavier is my 28-foot fiberglass extension ladder.  I’m really looking forward to using my new cart to roll that monster around instead of bruising my shoulder carrying it.