You may be wondering why it took me so long to nail together some plywood, and it has indeed been frustratingly slow progress.  The floor diaphragm that you see in the picture has a lot more going on than it looks like.  There are three rows of blocking under the floor, which take a lot of time to cut and install.  There are hurricane clips every two feet along the perimeter which tie the rim joists to the glu-lam beams.

Adding up all of the fasteners called for in the plans, I come up with about 2045 nails in the second floor frame and deck.  No, I did not count them individually.  But that gives a rough idea of the amount of work that went into what you see in the picture.

Next weekend I’ll be starting on the second floor gable walls.  Compared to the floor itself I expect the walls to go together pretty quickly.

I spent today installing sheathing on the second floor of the barn. I’m about 75% done. 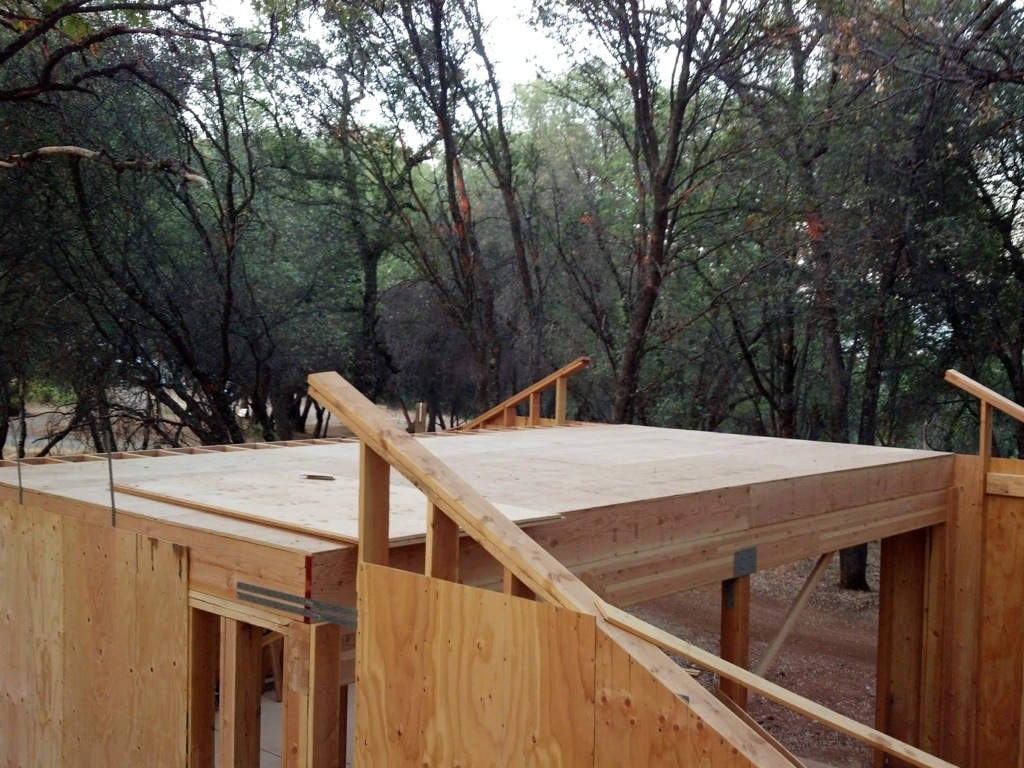 You would think that this should be pretty simple, right? I mean, how hard can it be to nail down some plywood? Well, it turns out to be pretty time consuming for two reasons: First, the tongue-and-groove plywood doesn’t really fit together easily. Because wood kind of sucks these days, the floor joists vary by about an eighth of an inch in height. That’s no big deal for the finished building, but it means that adjacent sheets of plywood don’t easily fit together without a bit of coercion. So I spent a lot of time today kicking and hammering sheets of plywood.

The other reason that the floor takes longer than you might think is that the engineer called for a nail spacing of 2.5 inches around the perimeter, and 4 inches at panel edges. That’s a really formidable quantity of nails. Even with a pneumatic framing nailer, just driving all the nails takes time.

So the upshot is that I didn’t finish today. I made pretty good progress though.

I finished up most of the floor framing for the second floor yesterday and today. Here’s an image of it half done as of yesterday evening. I was too tired today to take a picture of it completed. 🙂 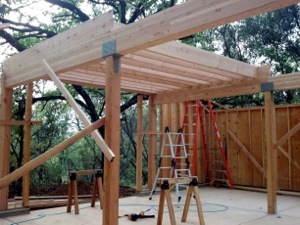 It looks like I’m almost ready to start putting plywood down on the second floor, but I have a whole punch list of items that I need to get done first. I probably won’t be putting plywood up until this weekend.

I had previously settled on the Square D CU12L400CB as the panel of choice for my electrical service. I had planned to bring in a 400 amp service, and sub feed all of the future buildings from that service.

As I mentioned below, I had PG&E out at the site last week and they recommended a smaller 200 amp service. Here’s the meter main that I like for this application. I can sub feed 50 amps to the barn, and 125 amps to the cabin. 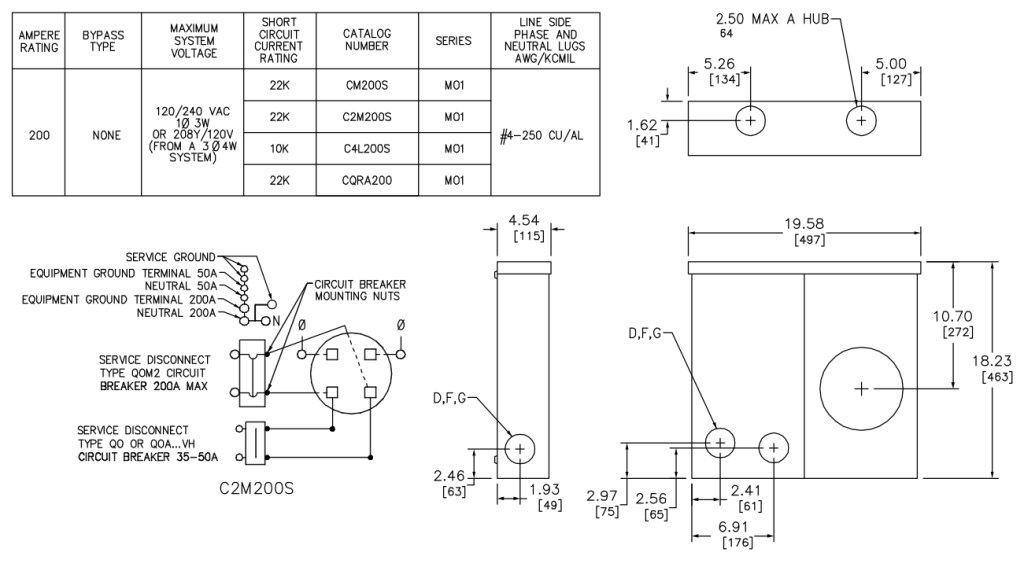 The astute observer will notice that 50 and 125 only add up to 175, not the 200 amps the service is rated for. The reason for this is that the provision for a QO breaker in this panel is limited to 50 amps, and I probably only want to feed 125 amps to the cabin because it will reduce the size of the conductors I need to run, and also the cheap QO main lug panels are rated for 125 amps. So my maximum load will be a little less than the service capacity. That’s no big deal.

I checked with the county planning department about having a second service installed if I want to build another house in the future. As usual, they started out with something along the lines of “there’s no way you can do that we will never allow it” without even letting me fully explain what it is I wanted to do. Once I managed to get the whole explanation out, then they were okay with it. If I build a second house on the property, then the cabin will be permitted as a second dwelling unit, with the future house to be considered the primary residence. Both are permitted to have separate electric meters, so I can install a second service to supply the house.

Work on the barn continues.  I haven’t had much to say here lately, I’ve been too busy working on the actual project.  🙂

I’ve got the beams all up, which was quite a bit of work for one person.  I’m ready to start work on framing the second floor! 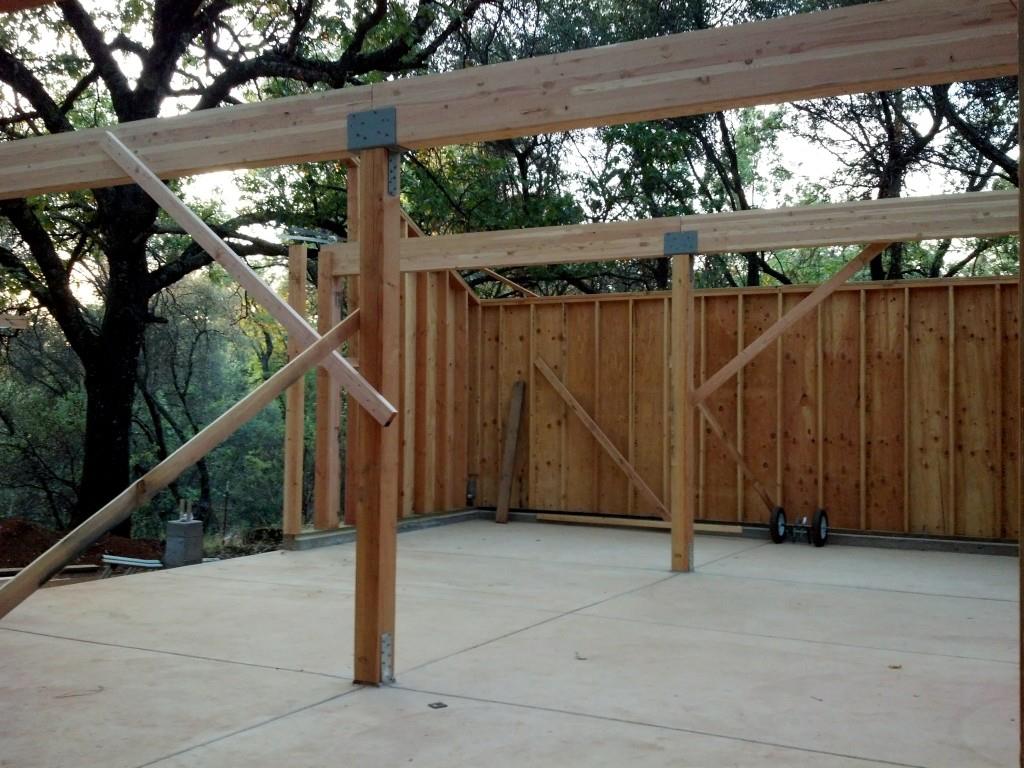 I had the PG&E service planning guy come out and look at my site last week.  He is trying to sell me on a smaller, 200 amp service.  I think his motivation is that he doubts I’ll ever use the full capacity of a larger service, and doesn’t want to bother installing excess capacity.  I’m not so convinced about that, but he does have a point that installing a second 200 amp service in the future if I need more amps will be cheaper than the single, large service.  And we’re not talking nickels and dimes here, the installed cost of a 200 amp service with a customer-owned pole will be something on the order of $3,000.  I’m looking at more like $9,000 for the class-320 service because PG&E has to install and own the pole, and also the service equipment will cost four times what the smaller equipment cost.

I’m inclined to go with the 200 amp service if I can confirm with the county that our parcel is properly zoned for a “second dwelling unit” on its own electric meter.

I took the weekend off from barn building to do a bit of socializing, and also so that I could learn how to weld. I found a shop in San Jose which is open on Saturdays, and I got myself all set up with a Millermatic 140 MIG welder.

I had my friend Wendy show me the ropes so to speak. She trained as a welder years and years ago before going into mechanical engineering, and she’s much better at it than I am. But even though my welds aren’t very pretty they do stand up just fine to a few good solid smacks with a hammer so I think they will suffice for my immediate purposes. 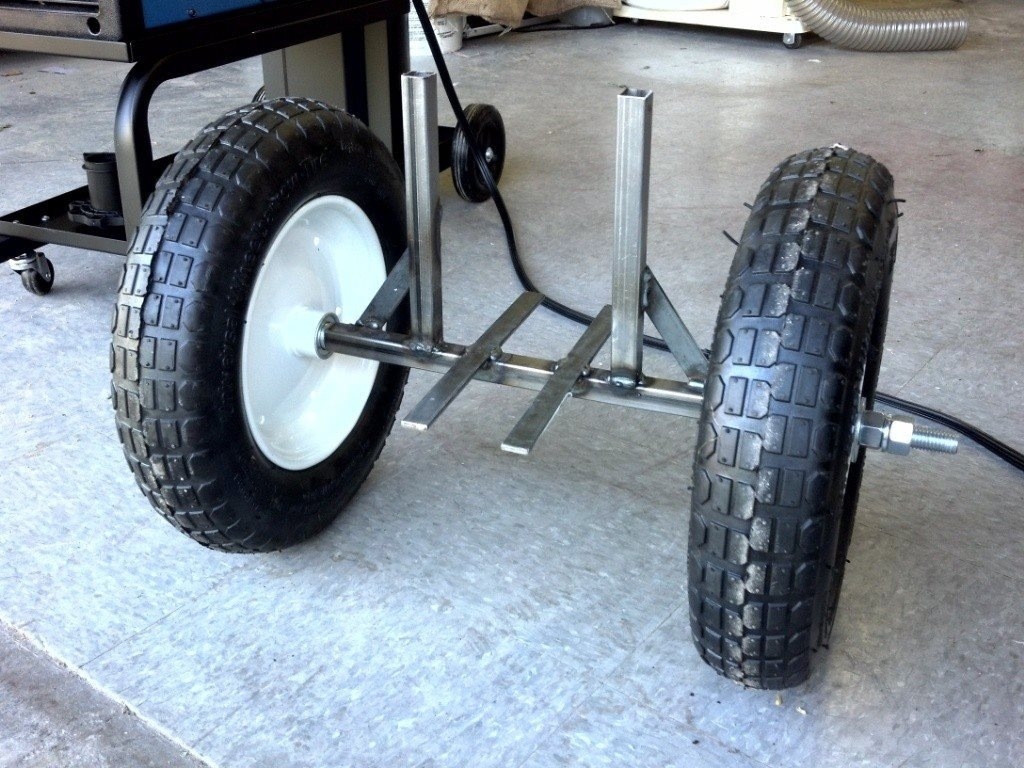 The motivation behind the strange wheeled item you see here is that I now have four 200-pound beams ready and waiting to be installed in the barn. I think I have worked out how to get them into place by myself, but I don’t have any way to move them around the job site. I built this two-wheeled dolly so that I can prop up one end of a beam, put the dolly in the center, and then trundle the whole affair around sort of like a wheelbarrow. I think it will work pretty well.

Now, does anyone know where I can get a bunch of cheap steel scraps to practice welding on? 🙂 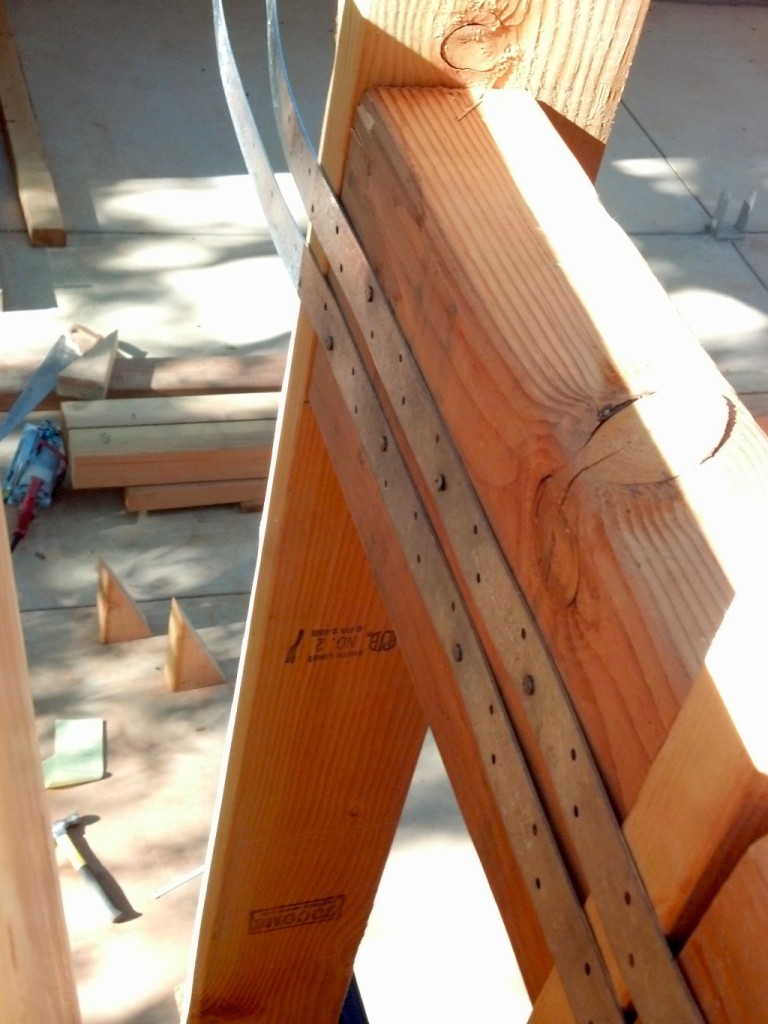 I have gone to great trouble to install it directly on the framing instead of over the plywood sheathing because that’s the way the engineer drew it on the plans. You can just see the plywood in the lower left corner of the image; it’s already nailed onto the lower three feet or so of the wall to help keep it square. I had to sort of bend the ply outward and brace it there to get enough space to fit my nail gun in the gap and nail the strap onto the blocking. It was a hellofa job on top of a 12-foot ladder. It would be much less difficult to install it over the sheathing, but I figured that it would be easier to get it past the building inspector if it looks just like the plans.

This morning I called the building department to see whether they needed to come out and inspect the straps before I button up the sheathing, and they told me to just take some pictures for them. They also said that most people install the straps over the sheathing and they are fine with it that way.

Well I’ll be damned!  Next time I’m just going to do it the easy way.

The careful observer might point out that it would have been much easier to nail the straps on before raising the wall, and that’s absolutely true. But being kind of an amateur, I didn’t do it that way (see previous post).  Live and learn.

The barn walls are progressing nicely. My friend ‘Rin was up at the site helping out on Sunday, and we got a lot of work done. It’s really looking like a building now! 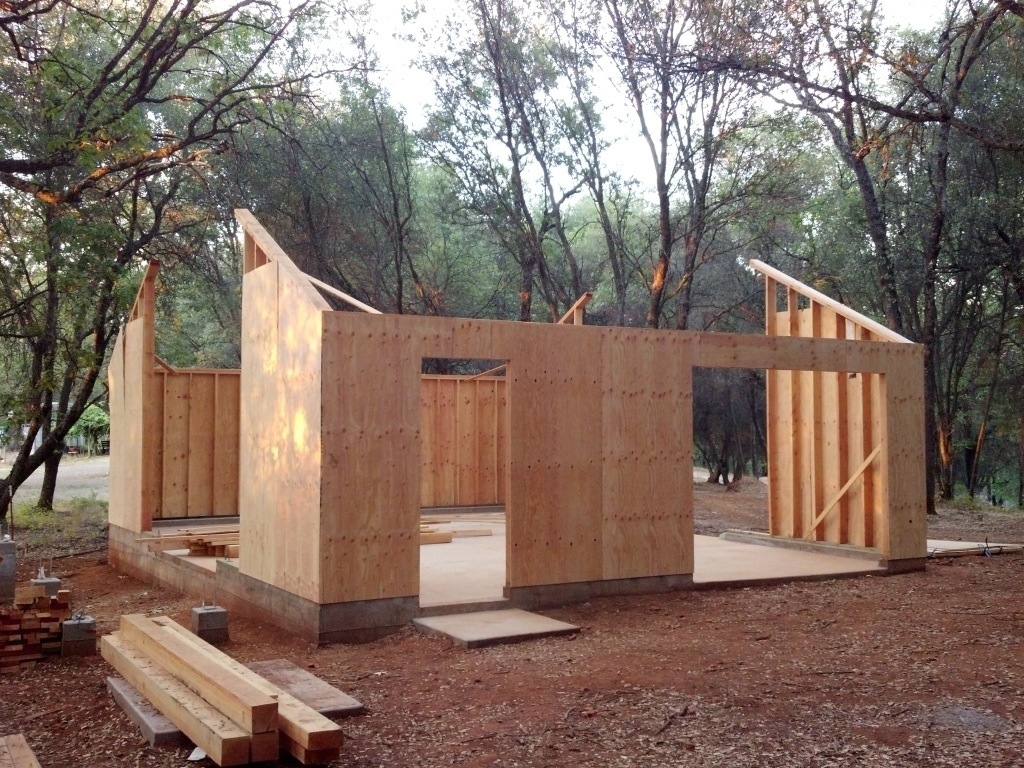 You can see in the image that the tops of the tall panels haven’t been nailed on yet. This serendipitously turned out to be a good thing. There is a steel strap which ties the gable walls and second floor diaphragm together on each end, and it is supposed to be nailed onto the framing slightly below the tops of the 10-foot sheathing panels. I didn’t realize until after the fact that the straps are supposed to be installed below the top of the sheathing, but since the tops of the panels haven’t been nailed on yet I should still be able to reach in there with a nailer and take care of it. 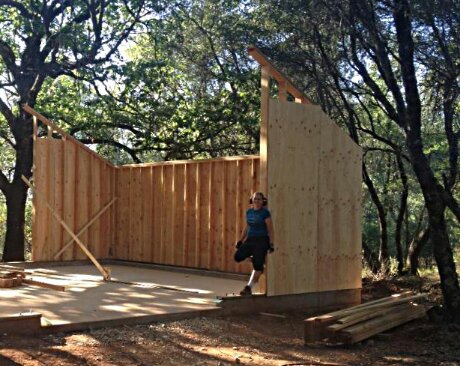 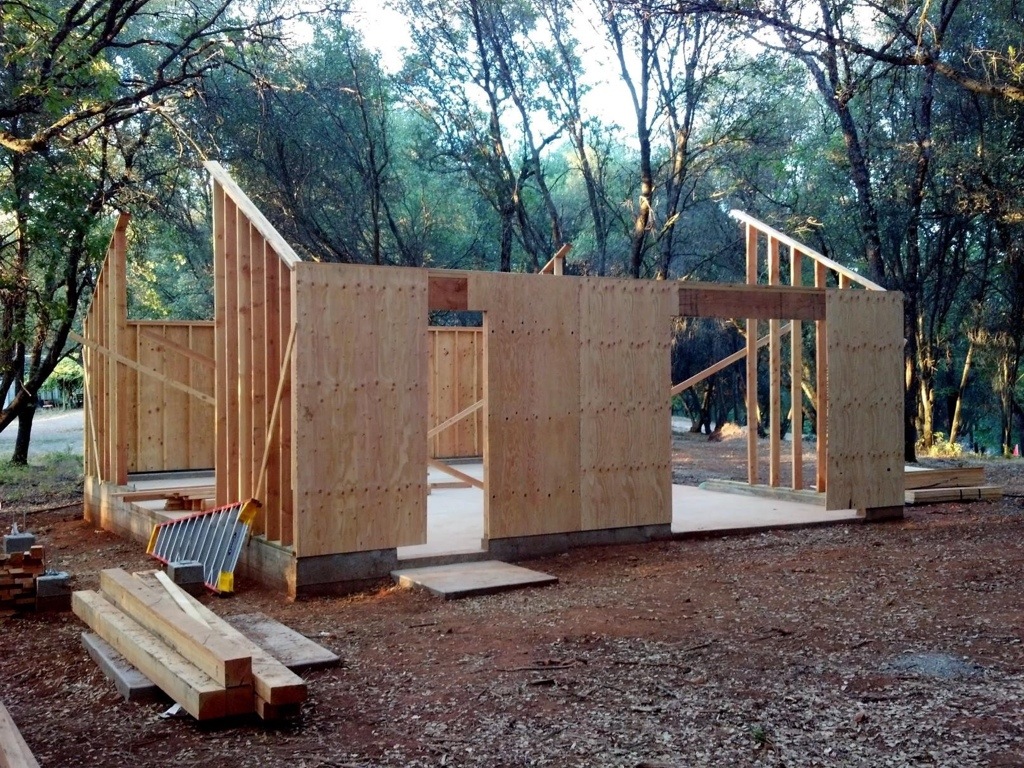 I got most of the sheathing on the south wall today. I haven’t completely trimmed it around the door openings yet, nor have I sheathed over the headers, but the structural parts are done.

There is a truly obscene quantity of nails in this wall. Because of the high ratio of openings to wall, the plans call for nails every three inches around the panel edges. That’s a lot of nails!

I got all the sheathing put up on the North wall this weekend! 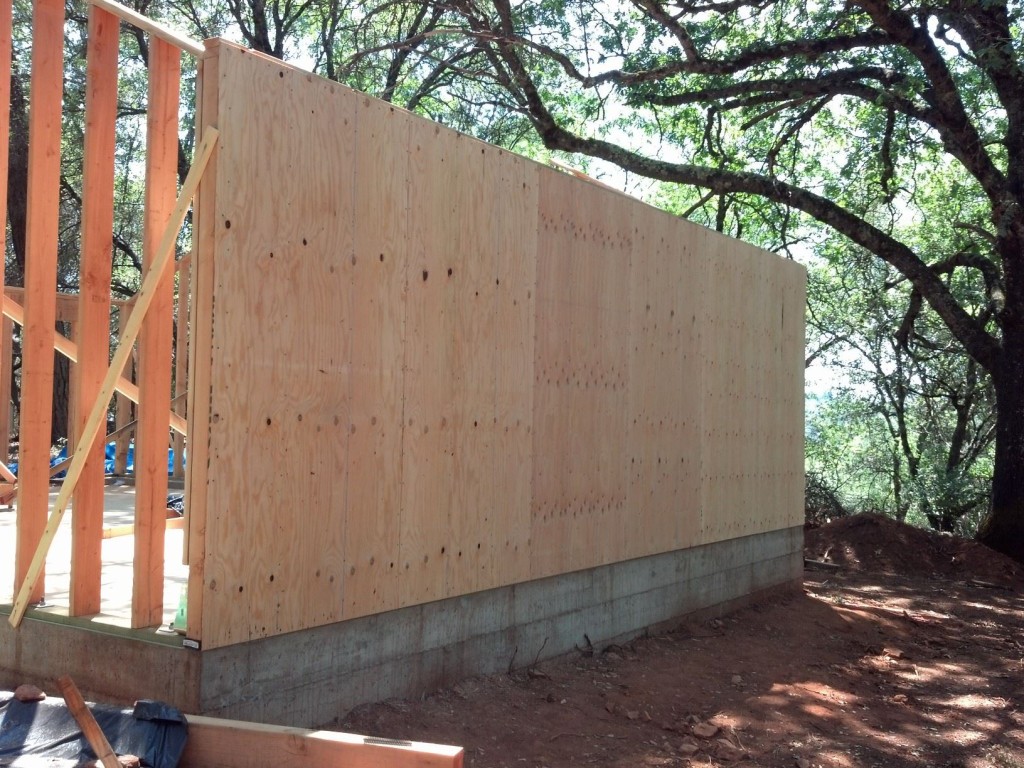 It’s 3/8-inch CDX.  Some people like to use 7/16 for regular light frame construction, and it does make for a stronger wall if you plan on having a lot of impacts, like maybe you live in a hurricane state or something.  3/8 is plenty strong for a normal wall though.  The weight savings is nice when you are hanging the plywood by yourself, and plus it’s what my structural engineer called for in the plans.

I also did some punchlist items with Simpson anchors and the top plate on the south wall, but those don’t really make for very interesting photos.

Is it “sheathing” or “sheeting”?

Some people like to refer to wall sheathing as “sheeting”.  I’m going to go out on a grammar limb here and say that this is wrong.  I think they say this because plywood and OSB come in sheets, so when you put the sheets on the wall you must be sheeting?  Right?

No.  The reason it’s called sheathing is that it wraps the building.  Like a sheath.  You don’t say that a certain type of electrical cable has an oil-resistant sheet, do you?  No!  You say that it has an oil-resistant sheath (if you don’t know anything about electrical cable then just trust me on this one).  Likewise, the plywood covering on a building is sheathing.  If you call it sheeting then you are wrong, although people will probably still know what you mean anyway.  There are a lot of colloquial variations in construction parlance.