It’s been a while since I posted a chicken update.  Things are going pretty smoothly out in the coop, although the days are much shorter now than they were in the summertime.  My Cuckoo Marans hen has stopped laying on account of the reduced daylight hours, and the Red and Buttercup didn’t get started before the days got short.  According to what I have read, if hens don’t starting laying during the summer then they may wait until the following spring.  I have been working on adding some artificial lighting to the coop to make the days longer for them, but that project isn’t finished yet.

As a result of this situation, I have been down to only one laying hen for the past several weeks.  Imagine my surprise this morning when I went out to check on the ladies and found a light tan egg which can only be from my Rhode Island Red! 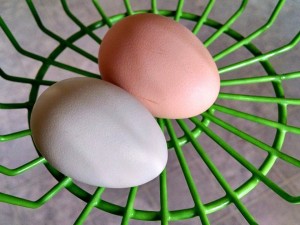 I’m excited that she’s decided to start laying!  Her first egg weighed in at 1.75 ounces, which is just barely a USDA “medium”.